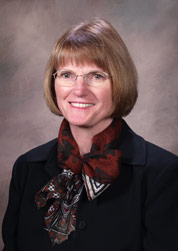 Cathy serves as our hostess, funeral assistant and pre-planning counselor with a life insurance license. She joined the firm on February 5, 2008. Cathy is active greeting families and assisting them throughout the funeral process. She has extensive experience working with people that she brings to our funeral care team. Assisting families as they pre-plan funeral services for loved ones is very important to Cathy.

Cathy’s early education was at Emeline Country School, very close to the farm where she lived. One of her biggest interests was 4-H. She graduated from Maquoketa Community High School.

Cathy was an office worker at Kalb Trucking in Dubuque. Later she was employed at Theisen Farm and Home Store in Maquoketa. During this time she took several accounting classes. She worked for 23 years with Ohnward Bancshares in Maquoketa which included the areas of Maquoketa State Bank, Maquoketa insurance, farm management, and administrative assistant.

Cathy is married to Charlie and has two sons. Both are married and have two sons. In the community Cathy is a member of Sacred Heart Church where she is a Eucharistic Minister & usher. Other work in the community included serving on the Extension Council and being an active member of the Maquoketa Alumni FFA Alumni. In her spare time Cathy enjoys spending time with friends and family and her grandsons. She is an avid gardener, loves to cook and sew and enjoys traveling to northern Wisconsin with Charlie to relax, golf and enjoy the beauty of the Northwoods. 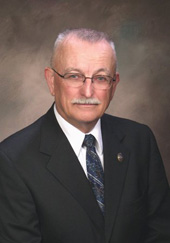 Curt serves as a funeral assistant and heads up our maintenance department. He first worked here in the 1980’s and re-joined the firm in December of 2006, after a long and distinguished career in law enforcement. Curt’s years of working in the law enforcement field have given him a vast amount of life experience and knowledge and he has been a tremendous asset to our funeral care team.

He attended and graduated from North High School in West Union, Iowa in 1961. He married Chy Fastbender in 1962 in West Union, Iowa. He came to Maquoketa in 1974 as a farm salesman, and then went to work as a custodian for the Maquoketa Community School District until 1979. In May of 1980, he became a police officer for the Maquoketa Police Department, a position he held for 21 years. During that time, he was known throughout the area as “Officer Friendly”. He also headed up the local “Dare” program. During his last two years in Maquoketa, he worked as the school resource officer. In 2001, he retired from Maquoketa, and became the Chief of Police for the city of Preston, Iowa, retiring in 2005.

Curt has been a longtime member of the Iowa State Policemen’s Association and the Iowa State Chief’s Association. He was a former member of the IPMBA. In the community, he has been active with the Peace Pipe Player community theatre for over 30 years. Curt enjoys biking, woodworking, camping and spending time with the grandchildren at the Mississippi River. He attends church at St. John’s Lutheran Church in Preston, Iowa. 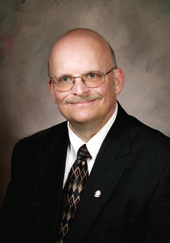 Charlie serves as our Aftercare coordinator and also as a funeral assistant. He joined the firm on January 4, 2005 and serves as a funeral assistant and heads up our AfterLoss Support Group. He has brought an extensive background with years of experience and training into this area of our funeral care team. He has facilitated adult grief support groups using Understanding Your Grief and The Understanding Grief Journal authored by renowned grief specialist Dr. Alan Wolfelt, Ph.D.

Charlie attended Monmouth College in Illinois and earned a B.A. in elementary education and learning disabilities in 1976. He moved to Mt. Pleasant, Iowa and taught first grade. He was accepted into graduate school at The University of Iowa where he was a research assistant in the counseling department and earned an M.A. in Counseling and Human Development in 1981. After working as a counselor at College Community in Cedar Rapids, he moved to Maquoketa and has worked as an elementary counselor for the Maquoketa Schools since the fall of 1981. He facilitated numerous Systematic Training for Effective Parenting groups from 1980-1999 and also started Parenting Again, a group that assisted grandparents raising grandchildren. Since 1995 he has co-facilitated over 250 Children in the Middle classes for Eastern Iowa Community College. He’s been a member of the American Counseling Association since 1979. As a member of the Iowa Counseling Association he held many positions, including state president. Charlie earned status as a National Certified Counselor in 1983 from the National Board for Certified Counselors. He became a certified Trauma and Loss School Specialist in 2002 from The National Institute for Trauma and Loss in Children.

Charlie is married to Cathy and has two step sons, Jamie and Brian. Both are married and have two sons. In the community, he is a member of the Jackson County Coalition Against Family and Domestic Violence. He is a member of Sacred Heart Church where he is a lector, commentator, head usher, Eucharistic minister, and on the stewardship committee. In his spare time he enjoys spending time with family, loves being a Grandpa, is an avid golfer, and travels to Northern Wisconsin with Cathy to golf and relax. 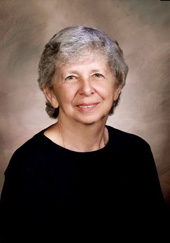 Ruth Ann serves as our on staff Chaplain/Celebrant, and in April, 2004, completed training with the “In-Sight” Institute to become a Certified Funeral Celebrant. The Celebrant training has allowed her to fulfill the needs of many area families who don’t wish to use a church and/or do not have a clergy for celebration of life services.

Ruth Ann Caraway Scott has lived her entire life in Jackson County. Her parents are the late Glenn and Betty Caraway. She graduated from Baldwin High School then attended AIC Business school in Davenport. After completion of that training she worked in the Payroll Department of Clinton Engines in Maquoketa. She married Doug Scott in Baldwin, IA and they have farmed near Monmouth since 1962. Ruth Ann graduated from the University of Dubuque in 1971 and taught at the Maquoketa Community High School for 14 years. She then began working as a Christian Educator with a cluster of United Methodist Churches in the area while attending the University of Dubuque Theological Seminary. She graduated from seminary with a Master of Arts in Religion (MAR) and was Consecrated a Diaconal Minister of Christian Education in 1987. She served on staff at St. Luke’s United Methodist Church in Dubuque for ten years. In 1997 she was ordained a permanent deacon in the UMC and began serving as pastor of the Park View and McCausland UMC’s.

Both Doug and Ruth Ann have been very active in farm groups, 4-H, and other community and church groups over the years. Their children and grandchildren are: Lee, Janet, Drew and Mallory Scott of Holland, IA, Mark, Lorna, Mindy and Kelsey Scott of Maquoketa, IA, and Kay and Mike Hein and their children, Josh and Zack of Walcott, IA. 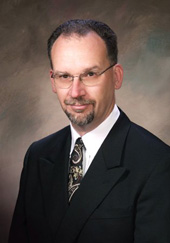 Ron has been with our staff since 1986, and is originally from Dubuque. He is a 1975 graduate of Dubuque Senior High School, and is a 1978 graduate of Worsham College of Mortuary Science in Chicago. He has been a licensed funeral director in Illinois and Iowa since 1979.

Ron is married to Cindy and has a daughter, Heather Rath of Maquoketa. He has one grandchild, Kassidy Eleanor. He is a very active member of the First Lutheran Church in Maquoketa and the Maquoketa Masonic Helion Lodge #36 AF & AM, where he has served as past Master. In his spare time he enjoys spending time with his family, doing yard work and reading.

Founded the funeral home in 1936. W.G. “Bill” Carson was born on September 18, 1904 the son of Frank C. Carson and Mary J. (Van Dorn) Carson. He started in funeral service as a child, washing cars and running errands for the former Buchner Funeral Home in Maquoketa. He was one of the few who knew how to drive a hearse and was used on a regular basis for that role.

“Bill” was an active member of the Maquoketa community for many years. He was known throughout the funeral industry to be from the “old school”, where professional ethics and skills were the essential backbone of the business. In the early years, he often would embalm the bodies in homes and stay all night with the family. Once the industry began the transition to the funeral home, he continued to be a master embalmer educating many younger embalmers and funeral service professionals on “old school” techniques no longer taught in mortuary school.

“Bill” was married to the former Dorothy Schoendelen, and they had a son, D. Rodney Carson of Maquoketa. They had two grandchildren – Valerie Clark of Des Moines, Iowa, and Don Carson of Maquoketa, Iowa. In his spare time he loved fishing and the outdoors, attending his grandchildren’s sporting events, and traveling with Dorothy to California every year.

W.G. “Bill” Carson died on March 23, 1988 at the Jackson County Public Hospital in Maquoketa at the age of 83. His wife, Dorothy, resides at the family home in Maquoketa and is still active in the community.

Rodney is married to Beverly and has a daughter, Valerie Clark of Des Moines, and a son, Don Carson of Maquoketa. He has three grandchildren – Nate Clark & Natalie Clark of Des Moines, Iowa, & Karysa L. “Ky” Carson of Maquoketa, Iowa. Through the years he has been very active in community projects and charities. He is currently a member of the Maquoketa Masonic Helion Lodge #36 AF & AM and the Izaak Walton League. He was a former member of the Maquoketa Volunteer Fire Department. In his spare time he enjoys fishing, watching sports- especially the Iowa Hawkeyes and Iowa State Cyclones, spending time with his family, as well as spending time in northern Minnesota and northern Wisconsin. 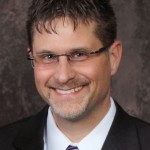 Is the third generation of Carson funeral directors and is a graduate of Maquoketa Community High School. He is a lifelong resident of Maquoketa, and holds a Bachelor of Science Degree from the University of Minnesota. He has been a licensed funeral director since 1994. He is also the founder of Udressit Company, and inventor of the Udressit Memorial envelope, which is currently used by funeral homes across the United States.